For over forty years, artists of the Fort Point neighborhood have welcomed visitors into their live-work studios annually to share the arts, industry, and creative culture of this unique community.

“When the artists in Boston’s Fort Point Channel section held their first open-studio event in 1980, they were considered urban pioneers. Many of the huge, old buildings in the industrial area around Summer Street had been empty for years; food-packing, wool-importing, and trucking companies partially occupied others. Few people, other than factory workers, knew the neighborhood or ventured in, especially at night. But artists saw opportunity there and seized it as they began the slow transformation of the buildings into spaces where they could live and work.

“It was pretty exciting,” says Lenore Tenenblatt, a painter, sculptor, photographer, and printmaker who has lived in Fort Point for 26 years. “There was a real community spirit. People would sign a lease for a whole floor, and groups of artists would get together and build their own walls.”

The Fort Point Arts Community (FPAC) was formed by the end of 1980 after the success of the first Open Studios event, to represent the artists’ interests and to serve as a clearing house for studio space.  (“A Short History of Fort Point” by Don Eyles) 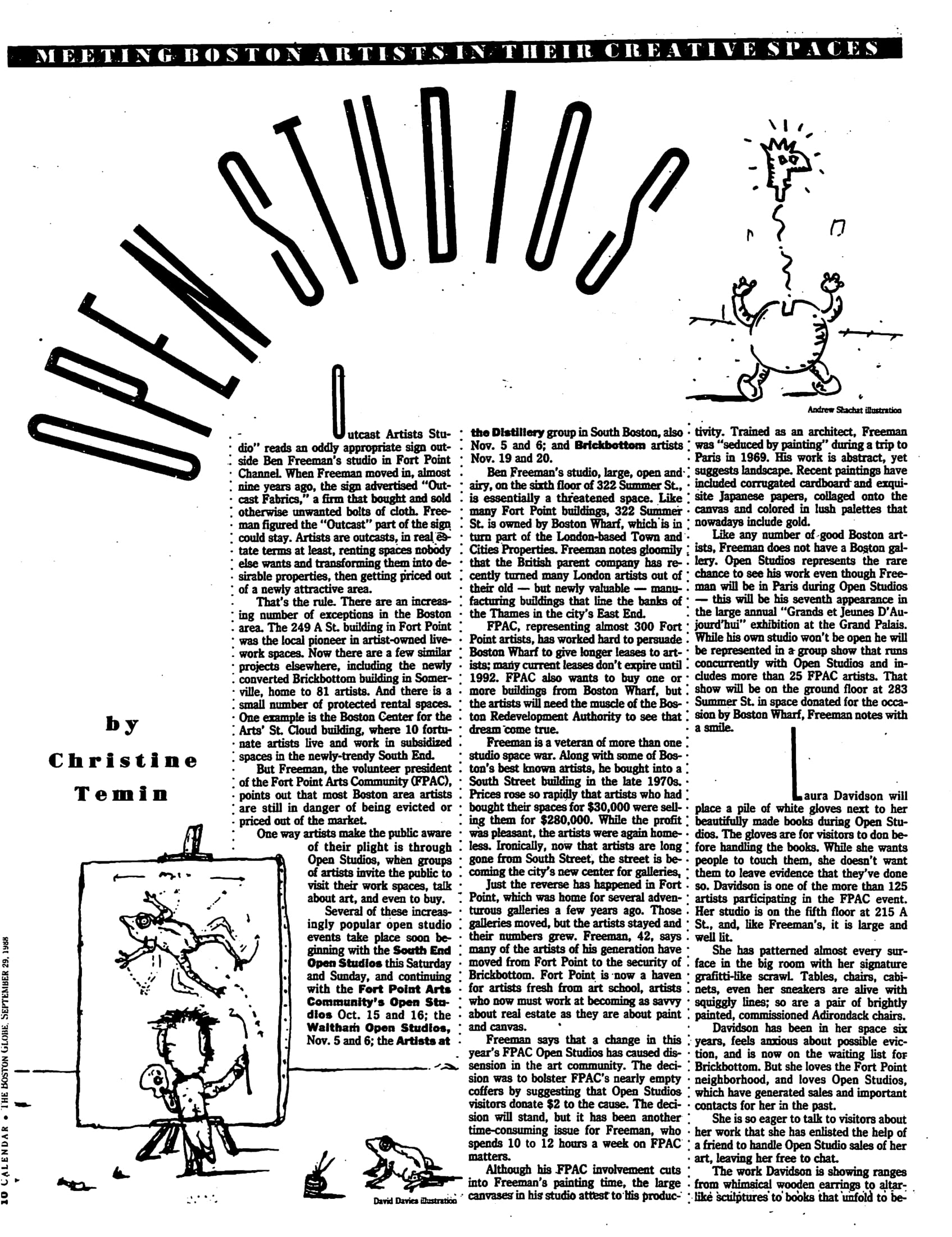 About the Fort Point Arts Community

The Fort Point Arts Community, Inc. of South Boston (FPAC) is a non‐profit community organization founded in 1980. FPAC’s mission is to build cultural vibrancy in Boston by cultivating an empowered community of artists, organizations, and supporters. The historic warehouses house painters, photographers, sculptors, designers, ceramicists, performance artists, jewelers, book artists, digital media artists, and more. We promote the work of our artists to a broad and diverse audience, advocate for art opportunities, develops permanent, affordable live-work studio space and ensures that art is an essential part of the life of a creative city.

In addition to its long-standing commitment to Open Studios, FPAC operates multiple galleries (FPAC Gallery, Assemblage Art Space, and the Gallery at Atlantic Wharf) with regular programming, coordinates an Art Lending program and offers other opportunities to increase the visibility of the art made by our members, including a one-of-a-kind floating public program in the Fort Point Channel.